An attempted coup in an oil-rich nation leads to the assassination of a princess… who happens to be the girlfriend of CIA-trained detective Solomon King. King sets out on an epic manhunt to bring those responsible to justice but danger lurks around every corner and no one can be trusted.

Solomon King is the long-lost, independently financed Black urban crime/action film from director/actor/producer/writer Sal Watts. Shot in Oakland, CA in 1973 with a cast of mostly non-professional actors, a stunning soul-funk soundtrack, and incredible clothes from Watts’s own Mr. Sal’s Fashion stores the newly restored film is a time capsule of a bygone era. Restored with the cooperation of the filmmaker’s widow, Belinda Burton-Watts (who appears in the film), and utilizing one of the only surviving complete prints of the film from the UCLA Film & TV Archive alongside the original soundtrack elements (which had been stored in Burton-Watts’s closet for several decades), Solomon King is ready to take its place among other independent 1970s classics. (Jack Bomay & Sal Watts, USA, 1974, 85 min.)

University of the Arts has updated its COVID policies for visitors and events, effective Aug. 22. Masks are now optional for all members of the community and campus visitors in all of the university’s public spaces, including the Levitt Auditorium. If you are feeling unwell, we strongly recommend that you consider not attending a Lightbox screening. Masks are still available at all Public Safety stations across campus. 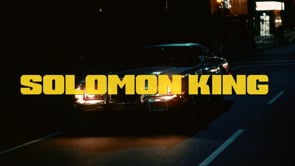